How to Add Spotify Music to djay Pro

Spotify stopped working on djay Pro? No worries, this article will explain how to download Spotify songs to computer and import Spotify playlists to djay Pro with ease. 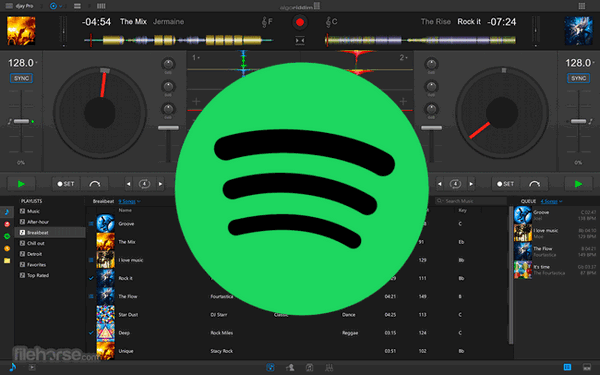 Today, streaming music has become an integral part of the DJ community as a whole, and most streaming services provide a green channel for DJs for musical creation. But when speaking of Spotify, it's no longer integrated with most DJ products on July 1, 2020, and djay Pro is not exceptional.

The only way to upload Spotify to djay Pro is first to download Spotify music as local audio files. Yet in general, Spotify songs are all protected from transferring or copying. In which case, Algoriddim users will need help from NoteBurner Spotify Music Converter.

Tutorial on How to Add Spotify Music to djay Pro Software

Spotify is a streaming music service offering encrypted Ogg-formatted songs, which can be listened to within the Spotify app only. So no matter you want to play Spotify on djay Pro or other non-licensed DJ software, there's always a way out after using NoteBurner Spotify music downloader.

NoteBurner Spotify music recorder is compatible with Windows 7 - 11 & macOS 10.15 – 13 Ventura. All Spotify listeners (Free or Premium users) are able to use this excellent tool to download tracks from Spotify to MP3/AAC/WAV/FLAC/AIFF/ALAC format audios.

More to the point, NoteBurner enables to keep 100% original audio quality from the high-quality music streaming from Spotify, settings are available to choose up to 320kbps and 192kHz rates. With this professional NoteBurner software, Spotify will become still working now on djay Pro! Before it's too late, check the main features of NoteBurner below, and don't forget to read the following tutorial on importing Spotify to djay Pro.

YouTube Video: How to Use NoteBurner Spotify Music Converter?

Download and install NoteBurner Spotify Music Converter on your Windows or macOS computer. Following we will take the Windows version as an example. Simply drag & drop a Spotify song, playlist, or album to NoteBurner, and it will parse the URL content and list your chosen songs in a new window as below. Tick on the Spotify songs you want to DJ and hit "OK".

Click the button "Convert" and NoteBurner will automatically start downloading Spotify songs to your local path, which has been customized previously.

After the conversion is done, you can find the converted audios by clicking the "Converted > Folder" button. Now that you've got unprotected Spotify Music songs on our computer, you can add the songs to the deck of djay Pro at ease:

Access Spotify Music on djay Pro on Windows/macOS: 1) On the left-bottom of djay Pro interface, you can add music to djay Pro from Music Playlists, iTunes, and Explorer Folders. 2) Click the Explorer tab and locate your Spotify music files, and "Import". 3) Simply drag and drop your Spotify songs to djay Por desk so that you can do a mix of your Spotify playlists. Or if you're using djay Pro on Android or iOS device, just connect your phone to computer, transfer the downloaded Spotify content to mobile, then you can also add Spotify songs to djay Pro on phone by the similar steps as above.

Tips: Downloaded Spotify songs can also be uploaded to OneDrive, Google Drive, Dropbox, so as to add to djay Pro.

In djay's music library, Algoriddim can access songs from TIDAL, SoundCloud, Beatport, and Beatsource streaming platforms. You can subscribe to both djay Pro & these streaming services to get over 200+ million tracks and an extensive collection of music videos. But if you're a big fan of Spotify, you can still use Spotify music on djay Pro after converting songs from Spotify to MP3/AAC/FLAC/WAV/AIFF/ALAC plain audio files.

NoteBurner Spotify Music Converter is exactly born to work this out. It's specially designed to help Spotify Free & Premium users to convert 82 million Spotify music songs, playlists, podcasts, or radios as local music files. With this powerful yet easy-to-use audio recorder, you can not only get 1:1 input and output high-quality Spotify songs, but also play Spotify streams on djay Pro, Premiere Pro, Serato DJ, Traktor DJ, or all other DJ software.

Note: The free trial version of NoteBurner Spotify Music Converter is limited to convert the first 3 minutes of each song. You can buy the full version to unlock the limitation. How to Add Apple Music to Djay Pro