How to Burn Spotify Playlists to CD on Windows/Mac

"I decided to burn some pop Spotify playlists to CD and send it to my nephew as a birthday gift. But I was wondering is it possible to burn Spotify music? "

Noways, though saving music on USB drive or other external hard drives is much more convenient, someone still chooses to burn audios to CD for backup. Whichever the reason is, burning CD brings us a sense of ceremony.

If you're still confusing how to burn a CD or how to free download music to burn, read on and this article will explain multiple methods to download Spotify songs and burn CDs. Why Need to Convert Spotify to MP3 before Burning CD?

If you frequently listen to music from streaming services, you should know that they had imported encryption protection to all music tracks. This measure is included with Spotify of course, they also encoded every single song in Ogg Vorbis format, limited to play on supported devices or players. Even Spotify Premium paid users are not allowed to extract actual music files from the platform.

As such, NoteBurner Spotify music downloader comes to help, a leading Spotify converter used to batch download any Spotify OGG songs to MP3/AAC/FLAC/WAV/AIFF/ALAC regular music format at 10X faster speed. And more than that, 320kbps high audio quality & ID3 tags will be preserved after the download completes.

How to Convert Spotify to MP3 via NoteBurner?


How to Burn Converted Spotify Playlists to CD?

There are various free CD-burning software you can find on Google, here we'll take four common tools to let you know how to burn Spotify music files to CD on Windows and macOS computers.

The Windows version of NoteBurner Spotify music downloader provided a handy CD burner in its toolbox. You can locate it by navigating to "Tools > Burn CD".

Step 1 Insert CD to your PC, and NoteBurner should read it and show under the Dis Burner.

Step 2 Give a name to your CD disk, and add a gab between songs if needed.

Step 3 Simply drag & drop the converted Spotify songs to the Add interface, and tap Burn to start recording to CD. 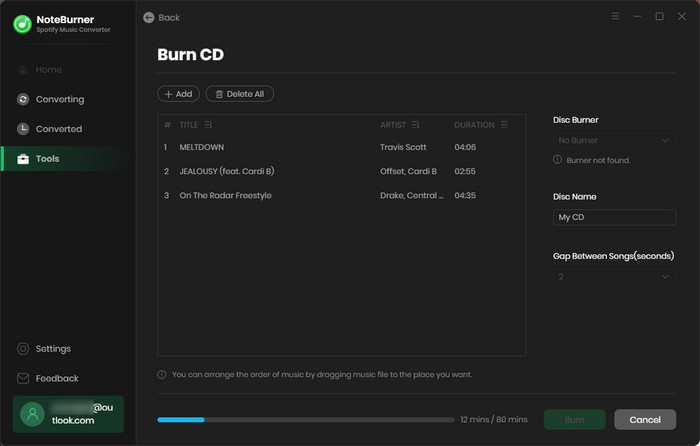 Step 1 Open Windows Media Player, and tap "Library > Music > All Music". You should find the Spotify music files there. 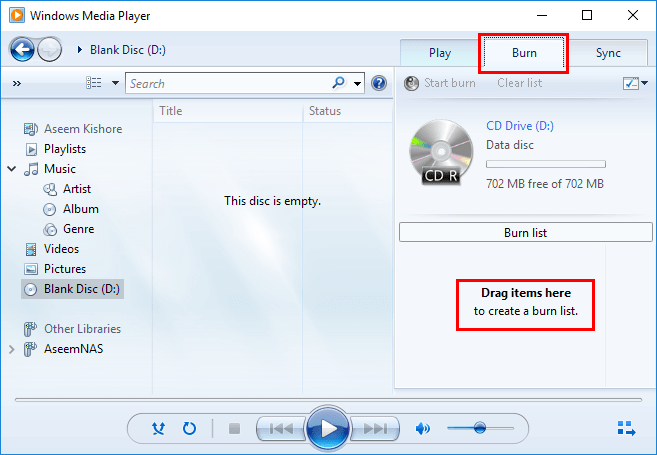 If you're a Mac user, congratulations. A pre-installed app called iTunes or Apple Music will help to burn music to CD. Check it out if you're unclear still.

Step 1 Open iTunes and click "File > Add File to Library". Then locate the Spotify content to upload them to your Apple Music library.

Step 2 Create a new playlist for your Spotify songs. Tap the three dot of your new playlist on upper-right, then "Burn Playlist to Disc...". Make sure you've put a blank CD into Mac before this step.

Step 3 In the pop-up new window, choose Audio CD or MP3 CD. The final step is to tap the "Burn" button to start burning Spotify songs to CD on Mac.

See Also: How to Transfer Spotify Music to iTunes Library? CDBurner XP is a freeware to burn CDs or DVDs, including Blu-Ray and HD-DVDs. If your computer cannot find a CD disk through the above method, CDBurner XP might do a favor. It can read any kind of disk and have a backup of disk data.

Step 1 Download and open CDBurner XP on your desktop, and select Data Disc or Audio Disc to open a project. Also, don't forget to insert a CD drive to computer.

Step 2 On upper side of the program, locate your downloaded Spotify music items and drag & drop to the area below as prompted.

Step 3 Tap Settings (like a gear icon) to customize some general settings, data options, audio options, etc. Click Apply when everything is done. 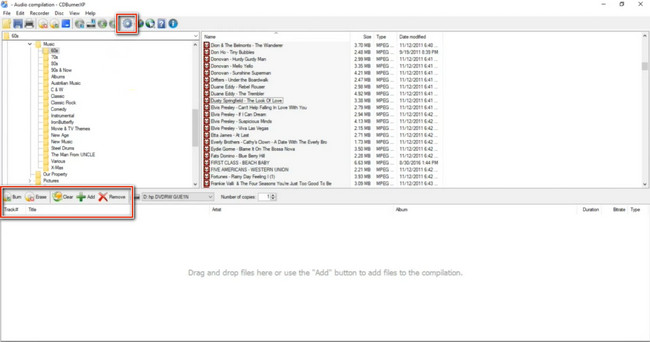 After converting Spotify to MP3 songs, you can burn the offline Spotify songs to CDs by NoteBurner's CD burner, Windows Media Player, iTunes/Apple Music, or CDBurner XP. After that, no matter whether you still continue using the Spotify Premium service or not, your Spotify music collection will live on CDs forever.

Note: The free trial version of NoteBurner Spotify Music Converter allows you to convert the first 3 minutes of each song. You can buy the full version to unlock this limitation and enable all its features.

What's next? Get the full version of NoteBurner Spotify Playlists Downloader now!