How to Set Spotify Song as Alarm on iPhone & Android

We all know the benefits of waking up early, just like the saying "Early to bed and early to rise makes a man healthy and wise.". But it still seems to be a tough battle for most to do that and even get frustrated when the moment we hear an annoying morning alarm. To strengthen the motivation and lessen the discomfort, it's advisable to change your standard beeping alarm sound to a favorite Spotify track.

Currently, most people listen to music by subscribing to a streaming music service, among which, Spotify is the most popular one. Here comes the question: Spotify songs are encrypted, for which we are unable to trim or edit them. So how can we set Spotify song as alarm on iPhone or Android phone?

Related Article: How to Set Apple Music Song as Alarm In this article, we are going to help you out in two ways to use Spotify song as the alarm for both iPhone and Android users.

Here we will recommend three alarm apps for Spotify – Alarm Clock for Spotify for iPhone users; and SpotOn, Google Clock for Android users.

Set Spotify as Alarm for iPhone

On iOS, Alarm Clock for Spotify is the app that we need. Similarly, we must log in to Spotify Premium account and connect a stable internet to select the playlist or song.

Step 1 Download, install and open Alarm Clock for Spotify on your iPhone.

Step 2 Log in to your Spotify account and tap anywhere on the screen to open the Setting Window.

Step 4 Set the time and select how often you want the alarm to repeat.

Step 5 Tap a Spotify Playlist and then tap Add in the upper right corner.

Step 6 Select the playlist, album or song that you want to set as alarm and then tap "Done" to finish the setting.

Note: Please remember to select Save to make the Spotify music alarm effective.

Related Article: How to Use Spotify as iPhone Ringtone Set Spotify as Alarm for Android

1. Use SpotOn to Set Spotify Music as Alarm

SpotOn is an alarm app, quite similar to Android's native alarm, with a simple interface that makes it easy to be familiar with. Now let’s check the details on how to turn Spotify to an alarm with SpotOn.

Step 3 Set the exact time for your alarm and tap the "TAP TO SELECT MUSIC" button. In a new window, you can choose either a playlist (or album) or a specific Spotify song as the alarm.

Tips: You can also decide whether you want a fade-in or shuffle effect for the alarm, as well as the feature of vibrate, show notifications, which day you want the alarm to start, and more. 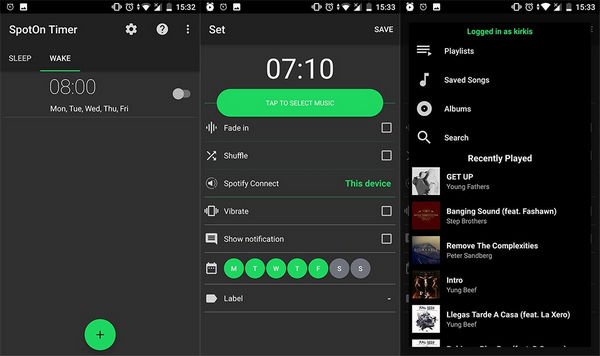 2. Use Google Clock to Set Spotify Music as Alarm

Here you can link your Spotify account to Google Clock app on Android, so that you can set any Spotify songs as your alarm.

Step 1 Download the latest version of Google Clock on Android.

Step 2 Choose an alarm time, then the tap "V" icon below and tap "Default Ringtone".

Step 3 On the new page, navigate to "Spotify > Connect > Okay" to access your Spotify library.

Step 4 Then just choose a preferred Spotify song in the selection. If you have Spotify Premium, you can search for a specific song as the alarm. Related Article: How to Use Spotify Song as Phone Ringtone

The above is about how to use Spotify Alarm App to wake up with Spotify track. And next, we will introduce a more powerful method to realize this alarm setting. By Method 2, you can not only set Spotify as your alarm freely, but also listen to Spotify songs offline, transfer your Spotify songs to USB, Burn your Spotify songs to CD, and so on. In addition, Method 2 is an effective way to set alarm for both Android and iPhone users.

Method 2: Alternative Way to Set Spotify as Alarm with NoteBurner

In Method 2, we are going to decode Spotify songs to a common format, such as MP3, AAC, FLAC, AIFF, WAV, or ALAC format so that we can set Spotify music as alarm just like ordinary tracks.

As we all know, it’s encryption technology that prevents us from downloading Spotify song to computer. In other words, as long as we can rip Spotify Music, we can easily save them as local files for makeing alarm clock or listening offline. Here we recommend the most popular Spotify audio downloading tool – NoteBurner Spotify Music Converter, which is specially designed for Spotify users to download and convert Spotify songs, albums, or playlists to MP3, AAC, FLAC, AIFF, WAV, or ALAC format.

NoteBurner Spotify Music Converter supports both Windows and Mac OS. Here we will take the Windows version as an example to show you how to convert Spotify songs and set them as alarm ringtone. For Mac users, please refer to How to Download Music from Spotify on Mac for detailed steps.

Click the "+" button, there will be a pop-up window prompting you to copy & paste / drag & drop the song/playlist link that you'd like to set as an alarm from Spotify.

Click the "Convert" button. The Spotify song or playlist you selected in Step 2 will be soon converted and downloaded to your local computer. When the conversion is done, click "Converted" button on the left side and you'll check all Spotify songs that have been recorded successfully. 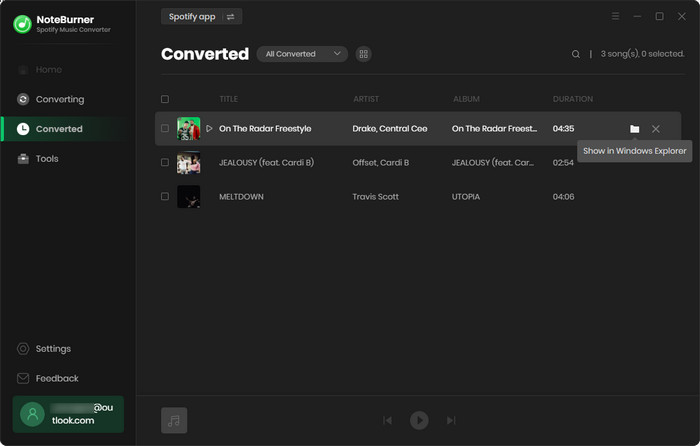 Step 5 Set Spotify Song as Alarm for iPhone or Android

Now you have got the open music format files of Spotify. Just transfer the well-downloaded Spotify songs to Android via a USB drive, or sync Spotify music to iPhone via iTunes easily. After that, you can choose the Sound option on the alarm setting, and pick a Spotify track to make it an alarm ringtone.

YouTube Video: How to Record Spotify Songs as MP3 Files Photo Enhancer AI can help you improve the quality of photos, such as album covers. It supports to enlarge photo size with quality kept, at the same time since AI technology is applied to process the photo. It can upscale album art in the best quality, make the old, blurred, or low-quality covers to high-definition.