How to Play or Sync Apple Music on iPod

Do you already have an iPod but covered by dust? It is time to take your iPod out for the purpose of listening to music, for example, when exercising our running outdoors. And if you are the subscribers of Apple Music, have you ever played or synced Apple Music songs on your iPod? It is very easy to play or sync Apple Music songs to iPod touch, because you can download Apple Music app on touch directly, but not for iPod nano, iPod shuffle or iPod classic, because Apple Music songs are inserted with protection which protect you from playing or syncing them on any other portable MP3 players. 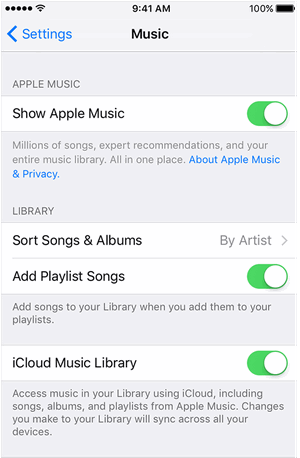 Tutorial on How to Sync Apple Music to iPod

Step 1: Add Apple Music Files You Have Downloaded to Converter

Launch Apple Music Converter on Windows and then click "+ Add" button. You can add Apple Music songs, albums or playlists you have downloaded.

Click the "Setting" button on the top right corner, and then there pops-up a window which allows you to set output path and output audio formats, like MP3, AAC, FLAC, AIFF, WAV, or ALAC. In addition, you are able to set the output audio quality up to 320 kbps.

When all the settings done, click "Convert" button to start converting. After conversion, click the "History" button in the main interface to find the output audio.

Now, you can use iTunes or Syncios Free iPod Manager to sync these files to your iPod.