How to Enjoy Apple Music on Kindle Fire

I have some favorite songs downloaded from Apple Music. Now I want to put them to Kindle Fire. Then I can listen to my music when read books on it. So how to do it? Any advice?

If you were in the market for tablet, Amazon’s Fire range has always been a decent choice. Amazon's Fire tablet line, while Android compatible, are thought of as the best Amazon media consumption devices. From Kindle Fire, Kindle Fire HD to the newest Kindle Fire HDX, all of the devices received positive reviews for the stunning features and stable performance. Amazon's Fire OS is derived from Android, and it runs some Android apps. But, although Apple Music app is available on Android device, you can’t find and download it on Kindle Fire to stream music. For that Apple Music is only supported on Android phones not Android tablets. So what if you want to enjoy Apple Music on Kindle Fire? 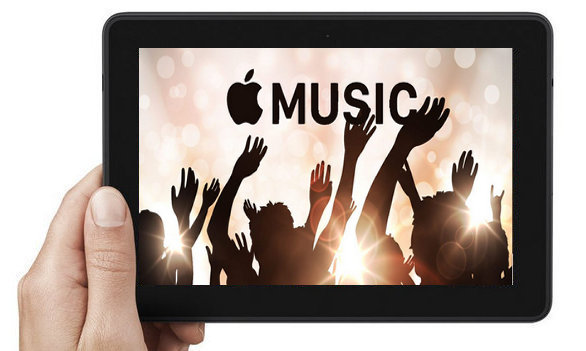 NoteBurner Apple Music Converter is such an iTunes recorder software to record Apple Music files, audiobooks, or other downloaded music from iTunes as well as convert them to MP3, FLAC, AAC, AIFF, WAV, or ALAC format at up to 10X conversion speed with keeping CD output quality. The program is easy to operate, just several clicks you can get a lossless Apple Music file for Kindle Fire.

The following is the detailed tutorial to guide you to convert Apple Music songs and transfer them to Kindle Fire. Please download NoteBurner Apple Music Converter first before getting started.

Tutorial about How to Transfer Apple Music to Kindle Fire

After conversion, you can transfer Apple Music songs to Kindle Fire. Please simply connect your Kindle Fire with your computer by USB cable, then transfer the converted Apple Music to Amazon Kindle Fire tablet for enjoying at any time you want.