How to Save Justin Timberlake's Songs from Apple Music to PC

On June 13, 2016, Apple Developers Conference WWDC was held in San Francisco, and the Conference announced that custom feature list and more new functions are open to users. From professional musicians to students who like listening to music while reading can find their own way in music in Apple Music. Maybe Apple Music is changing everyone's musical experience in such a simple and elegant way. For example, discover a melody - "Can't Stop the Feeling" on Top Songs of Apple Music and iTunes Music, then begin to love with it and repeating it day and night, finally cannot stopping sharing it with friends.

Breaking onto the scene back in the early 90s as a part of pop group-NSYNC, Justin Timberlake is back now last week with a totally different feeling-a nice single. Taken from the official soundtrack of DreamWorks Animation's upcoming motion picture, Trolls, for which Timberlake will invoice the main character- and making the cut for Apple Music's just refreshed "Best of the Week" playlist-Can't Stop the Feeling! The track is available to stream from days ago. When the familiar voice came into our ears:"I got this feeling inside my bones it goes electric wave when I turn it on All through my city all through my home We're flying up no ceiling when we in our zone". It seemed that our blood is burning and our body is filled with passionate creation. Review: The first half of the video tells the story of Justin's grandfather and grandmother in love. After William's death, video mirror on both sides of the young and old grandmother, symbolizing that she is growing old, and love has gone away, but she had to move on. The last chorus, said that grandmother lost love ring, and Justin catch the ring, dancing in front of the many mirrors.

Review: Our expectation is our greatest enemy. If we give up the concept that every album of Justin has a dance, the Suit and Tie, we can actually expect more from.

As we all know, since 2009, Apple has called off the their music protection from iTunes music, however, from the day when Apple Music came out, this protection for digital music come back to us and we cannot enjoy our favorite music freely even though we subscrible it. For examle, we can not play Apple Music songs without network connection, and on MP3 players. Once subscriptions expired, the downloads and offline listening are not accessible. In order to preserve our favorite music (eg: Justin Timberlake's Songs from Apple Music) forever and save them to our PC, even other non-apple devices, it is essential to record Apple Music. The following article will tell you how to save Apple Music songs on PC forever.

We always hope that all beautiful things can last forever, music is the same. So we need to find a tool to record Apple Music songs and save it to our PC. Just in time, we can turn to NoteBurner iTunes Audio Converter for help.

Now, the Apple Music songs (Can't Stop the Feeling or other hot songs of Justin Timberlake) have been converted to the plain formats you want, and you can keep it forever on your PC or transferring it to other devices. Just enjoy this summer tune to fresh your spirit.

YouTube Video: How to Export Apple Music Playlists to MP3 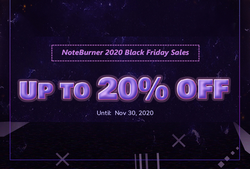