There are multiple Tidal Music Converters in Google Search, but few of them are HiFi & Master Quality output guaranteed. While NoteBurner Tidal Music Conveter, built with an advanced music recording core, breaks out to convert and save Tidal songs to local computer (Windows 11/10/8/7 & macOS 10.11-12) with 100% original sound quality retained. No more limiting to playing music on Tidal app, every single track converted by NoteBurner could be transferred to any desired device. Next, we will have a brief introduction to this newly roll-out of Tidal Music Converter. 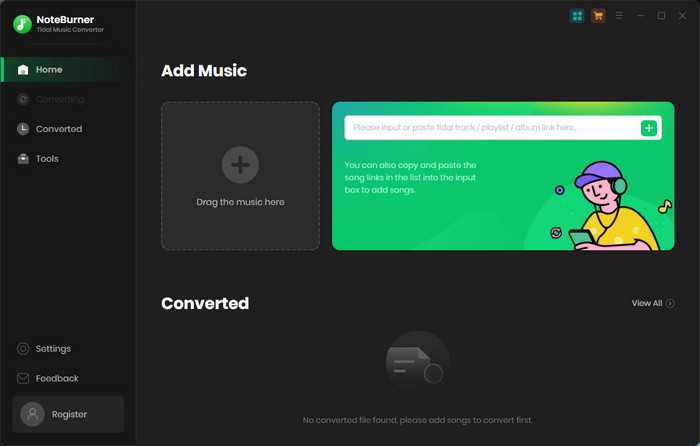 Differ from the other Tidal downloaders in the industry, NoteBurner Tidal Music Recorder follows a user-friendly interface, the same as other on-sale music converters within its website. Through consistently honing, the interface of all NoteBurner programs is more simple, neater, and vivid than usual. Even if a computer beginner could use NoteBurner to download Tidal playlists handily.

Besides that, NoteBurner Tidal Music Converter is able to recognize Tidal music songs by dragging & dropping the music URL from Tidal desktop app. By this method, users are not required to log in to the Tidal account on a third-party tool, which dispels doubts greatly.

Next is going to discuss the basic feature of this release program: Convert Tidal Music to plain music formats, including MP3, AAC, FLAC, WAV, AIFF, and ALAC with up to Master Quality & ID3 tags preserved. After converting Tidal streams via NoteBurner, all Tidal playlists are supported to import to USB drive, car player, TV set, MP3 player, or more desired equipment.

Some may be confused about the conversion speed on this newly Tidal playlist downloader. Here's the answer - NoteBurner Tidal Music Converter allows to batch record and download any Tidal Music titles at up to 5X faster speed on the Windows system, while the Mac version supports 1X speed only for the present.

With the built-in toolbox on this new program, users can also convert the local music files to MP3/M4A/FLAC/WAV/OGG/AIFF format, by simply going to "Tools > Format Converter". Except for the NoteBurner subscribers, all trial users are allowed to go for this Format Converter for totally free.

In short, NoteBurner Tidal Music Converter is an easy yet powerful audio downloader, specially designed to download any songs from Tidal Music to MP3, AAC, WAV, FLAC, AIFF, ALAC format at 5X speed with no quality loss. See highlights below: