Once again, Samsung Galaxy S series has been reviewed as one of the most possible iPhone competitor. The new released Galaxy S7 really did a good job, better even than the excellent Google Nexus 6P and iPhone 6S. Let's now explore together how Samsung Galaxy S7 compared to iPhone 6S.

What Samsung Galaxy S7 does better than iPhone 6S?

1. The Galaxy S7 is water-resistant. It has an IP681 rating, which means it can go more than a meter under water for around 30 minutes.

2. The camera is better. Samsung has turned every pixel in the image-capture chip into a focus pixel, a technology it calls “Dual Pixel.” Galaxy S7's camera can auto-focus faster than the iPhone 6s and takes better photos in the dark.

3. Battery life is longer and charge wirelessly and quickly. According to Cnet, the S7 averaged 16 hours in three tests, which is longer than iPhone 6S' 10.5 hours on the exact same test.

4. You can add more storage with a microSD card on Samsung Galaxy S7, while iPhone 6S does not support microSD card.

How to enjoy iTunes movies on Android devices like Samsung Galaxy S7?

What you will need:

Click the Add Movies button on the main interface to open iTunes library tab. The program will automatically search the DRM M4V videos from iTunes Media folder. Then, select the files you want to convert and then click OK. Click the button next to "Convert to", then you can choose the output format from the profile menu. NoteBurner M4V Converter Plus for Mac supports multiple formats well including MOV, MP4, iPod, iPhone formats as output.

Click the Convert button at the bottom of the main interface and start to convert iTunes M4V to normal video. When the conversion done, iTunes movies and TV shows are no different from other local video files. Now you can transfer the converted iTunes movies to Samsung Galaxy S7 for enjoying. 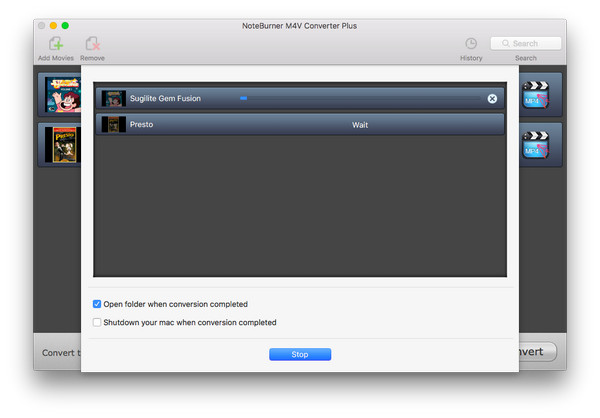